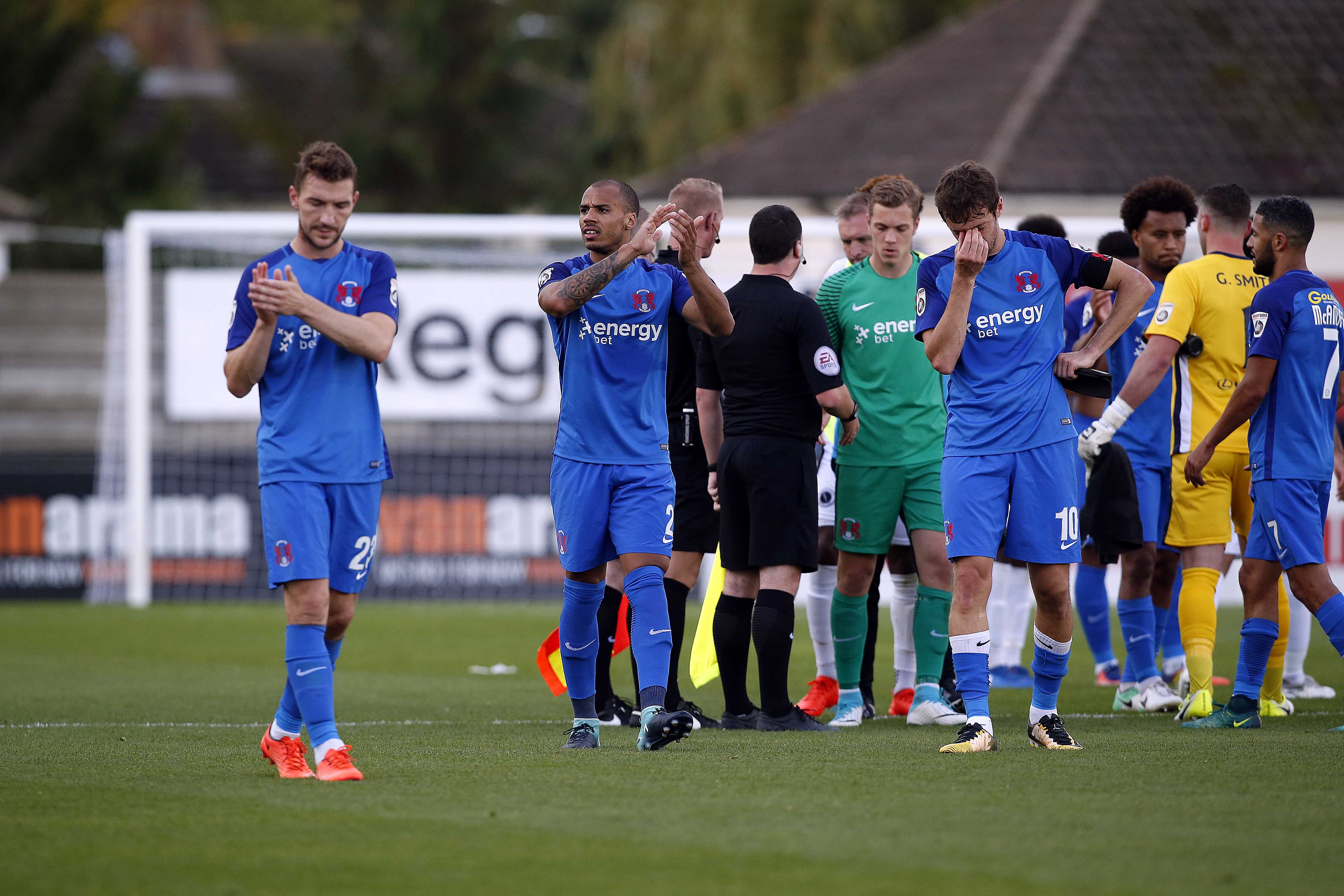 For Orient: Fylde Under Defeat

AFC Fylde shocked big boys Leyton Orient 2-1 with Danny Rowe scoring a brace at a packed Brisbane Road to send the minnows home back up the M6 with the accolades which they fully deserved.

They could even have Lewis Montrose sent off to finish the game with ten men as Leyton Orient failed to deliver and continued their recent poor run of form.

The O’s August second place in the National League looks further up the M6 than the Fylde supporters five hour trip up the motorway as the away team hung on to give Orient the jitters as the Londoners fall to 15th in the league.

Suddenly there is an air of doubt and belief at Brisbane Road and this certainly made it’s way onto the pitch as Orient appeared nervous, shaky and lacking in self esteem. What may be Orient’s saving grace this season is that there are some very poor teams in the division, come on down Torquay (4 points from 13 games!), Solihull Moors and Guiseley to name three teams. However Orient will be looking over their shoulders as it’s important to remember that four team are relegated from the National League.

Yet Fylde themselves were one place above the relegation zone coming into this game against their more lofty opponents and on home turf Orient were expected to do much better, that they didn’t will invoke much cause for concern.

The away team started like a bull a China shop to the surprise of Orient and it was all hands to the pump as Danny Rowe narrowly missing the target from 25 yards after just two minutes, but the 27-year-old found his range 13 minutes later with a deflected free-kick to give Fylde something to shout about and deservedly slow.

To say Leyton Orient were slow out of the blocks is an understatement as Fylde look to build on their lead as the majority of the 4,357 attendance looked on in disbelief as the northerners bought the game to the O’s. Fylde only brought 93 supporters with them but it would have been an immensely proud journey home for the underdogs.

Ask most people and they won’t have a clue where or who AFC Fylde are but the Lancashire outfit formed only 29 years ago sure didn’t go missing on the pitch as they invited one of their biggest wins in their history. This is a problem now for teams like Hartlepool, Torquay and Leyton Orient, they are sitting ducks for teams like Fylde who were last years National League north winners.

Orient simply weren’t creating enough, Jobi McAnuff had a half chance but his deflected shot was wide after 8 minutes in Orient’s only attack in the first 20 minutes. The O’s had a better chance with 25 minutes on the clock. Happe picked out Bonne and he turned before finding Clay and he smacked a low effort towards goal, but Fylde keeper Jay Lynch saved with his feet.

Fylde played some neat football but couldn’t make enough of a couple of half chance and Orient at least had another decent chance in the 40th minute as McAnuff won a free kick on the edge after a foul by Lewis Montrose. James Dayton’s cross was dangerous, but the defence cleared to McAnuff and he crossed in for Happe, but the youngster headed wide. Dayton had another shot blocked on 43 minutes and were getting back into the game so the half time whistle went at the wrong time for the home team.

The half time break gave the visitors time to regroup and they started the second half like bees in a beehive with plenty of guile and teamwork and Rowe was given too much time and space and hit a pile driver from 30-yards, which flew into the top corner. An absolute corker of a goal after 48 minutes as 93 teary eyed way fans went ballistic sensing the biggest win since their 2008 FA Vase Final triumph.

The cut and thrust just wasn’t there from the home side as Ellis both headed over although they did pull a goal back after 73 minutes. James Dayton found Jobi McAnuff at the far post and he headed into the bottom corner.

Rather than lay down and die Fylde just slowed the game down. Lynch saved from O’s sub Harrold after 83 minutes but Orient weren’t making anything worthwhile despite Lewis Montrose seeing red for a second yellow card.

Have a flutter on the O’s here. https://energybet.com/sports/betting/prematches/5/474/777/