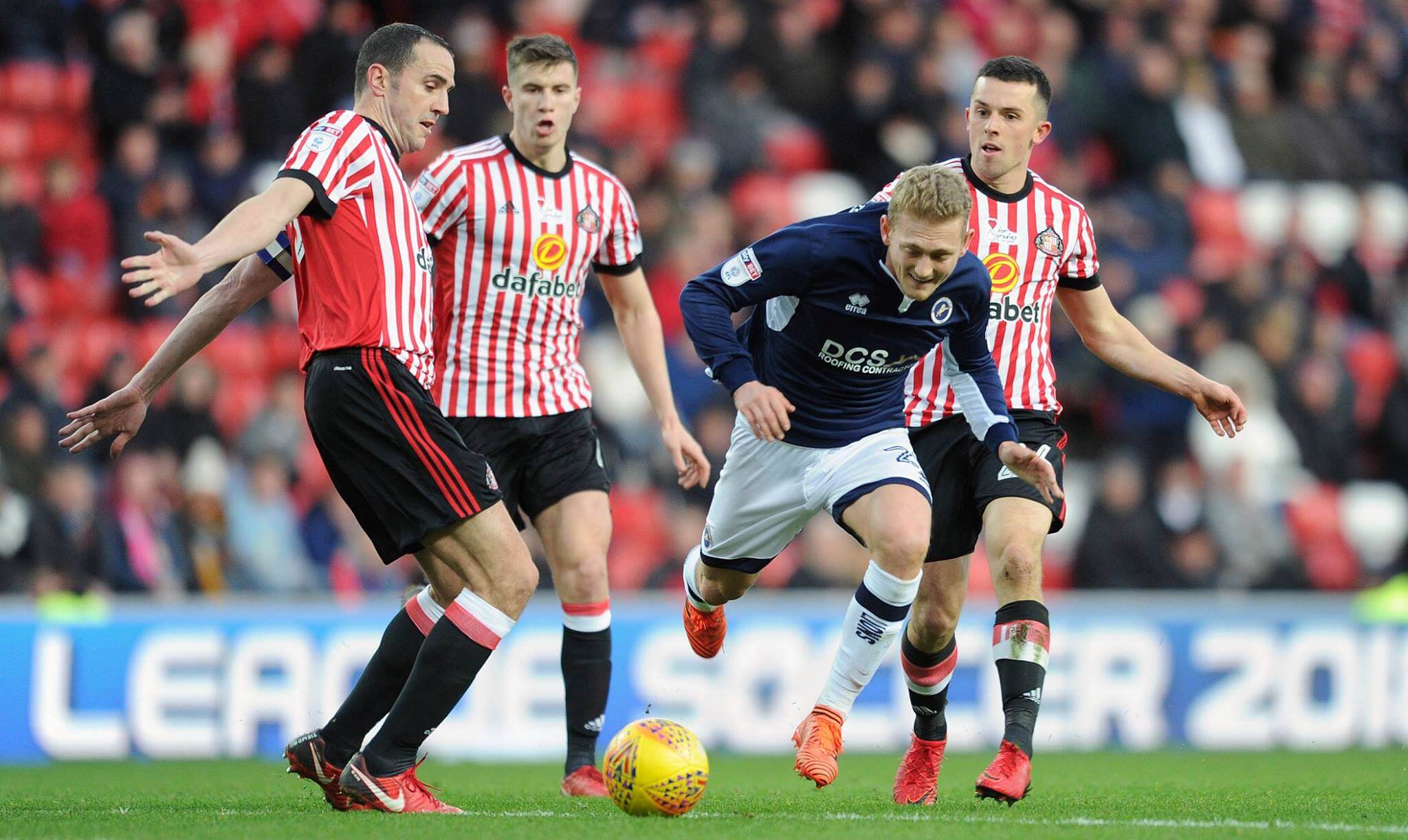 Millwall could only come away from the North-East with a point after a 2-2 draw with Sunderland at the Stadium Of Light.

However the Lions will look at this result as two points lost rather than one point gained against a Sunderland side rooted to the bottom of the Championship and without a home win in 20 home matches!

The Black Cats have failed to win a game at home in the second tier of English football and with manager Simon Grayson sacked recently after just 18 games in charge many thought this would be the perfect time for Millwall to break their own statistic of having not won away from home for ten matches.

It was probably on the cards that this game would eek out as a draw and so it turned out to be although in a much more entertaining game than many would have given either side credit for however the fact there were 4 goals in the game probably has more to do with 2 shoddy defences and 2 keepers with third degree burns to the hands as they both dropped everything all day rather than flowing attacking forward play from either Sunderland or Millwall. Chris Coleman resigned from his Wales post on Friday and is set to take over next week at Sunderland and he couldn’t have chosen a tougher job with Sunderland Football Club on the cusp of hari kari. Caretaker Manager Robbie Stockdale attempted to steady a sinking ship and his team showed some fight as did Millwall who approached the game in a hard nosed, unsophisticated way. They attempted to unsettle the Black Cats with a flurry of fouls and committed a whopping 17 fouls in the game.

In a maze of goalmouth activity in the first quarter of the game Lewis Grabban poked home for the home side after only 12 minutes but George Saville was in scintillating form for the visitors notching twice. The first came just four minutes after Sunderland had scored as Saville’s free-kick was spilled by Black Cats keeper Robbin Ruiter and dribbled into the net to the consternation of the home fans and he scored a free-kick just four minutes later to put the Lion’s 2-1 up with only 20 minutes on the clock.

Both defences looked edgy and vulnerable and despite the entertainment it did indeed look like a bottom of the table scrap between two teams out of form and out of luck and so it proved to be for Millwall with Sunderland’s leveller.

Adam Matthew’s on the wing sent in a dreadful cross that some would say caught the wind however it would be fairer to say he ballooned it, only to see the ball swirl into the back of the Millwall net. Cruel on the visitors but to be honest Millwall’s attacking intentions weren’t that prevalent against the home team and they only accounted for 35 per cent of the possession. You have to feel sorry for Sunderland fans, a fantastic 27,399 turned up to see the bottom club make history for all the wrong reasons as their team became the first team in English football history to fail to win in 20 successive home games in all competitions.

Sunderland remain bottom of the Championship and have not won a game at the Stadium of Light since beating Watford in the Premier League in December 2016.

Millwall are five points above the relegation zone but looking over their shoulder in 18th place.

“It wasn’t a day for goalkeepers. Jordan Archer will be the joint most disappointed person in the ground along with their keeper. We’ll get round him and make sure he’s all right because he’s been good for us this year.

“He’s the first to admit he’s made a couple of errors but that’s football I guess. It was a game with quite a lot of errors in it, but that made it entertaining.