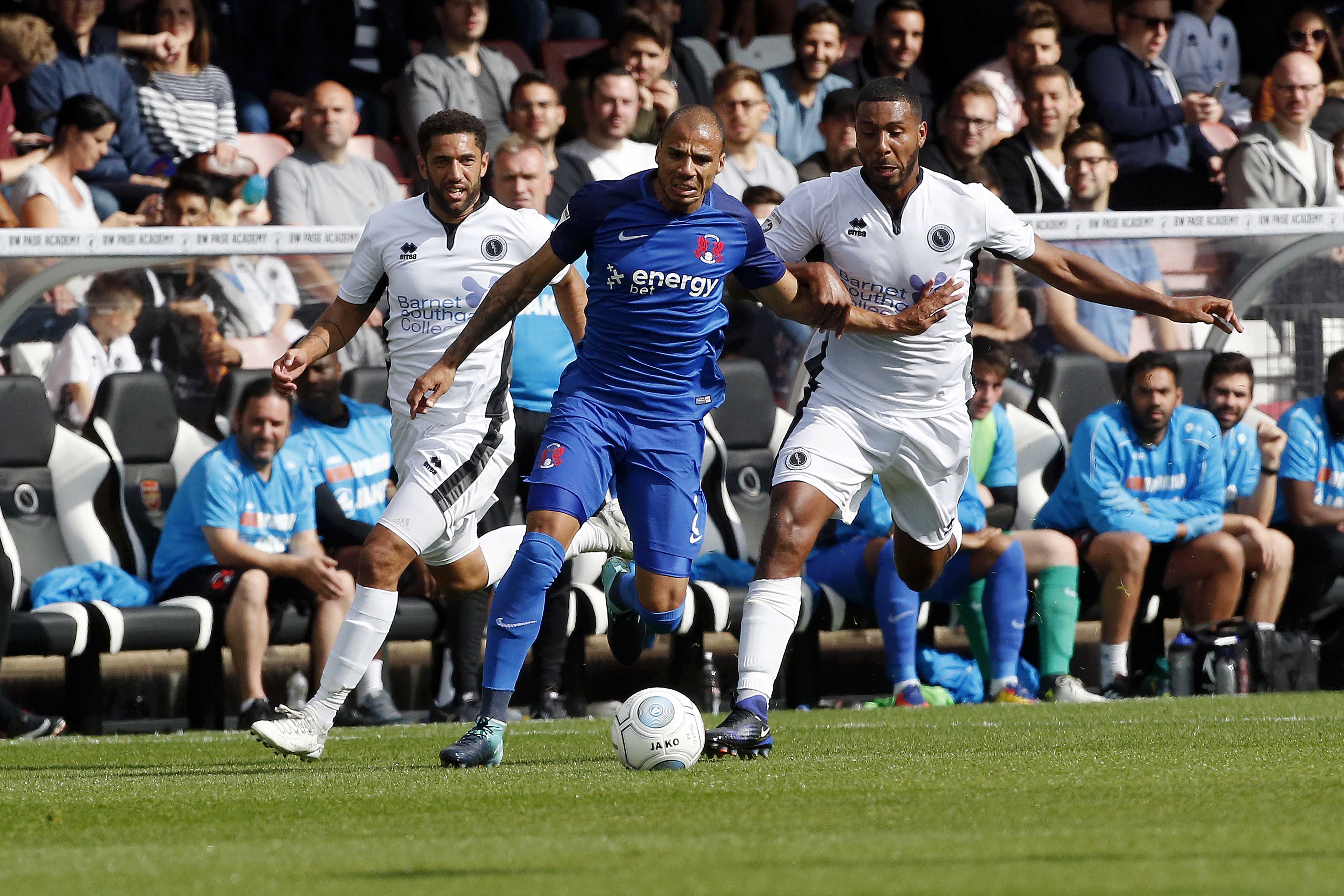 Orient endured a bad day at the office as they came crashing down to earth in front of a record attendance as Boreham Wood thrashed them 2-0 in a game where the scoreline flattered the O’s.

1,920 crammed into Boreham Wood’s Meadow Park ground to witness Leyton Orient second best for most of the match as goals from Dan Woodards and Kieran Murtagh were enough to send Orient home empty handed and the club drop down the table to 4th position in the National League.

Worse still was that with six minutes to go George Elokobi limped off possibly with a hamstring problem. Elokobi who has been an absolute rock for the O’s so far this season will be assessed on Monday to see if he will be available for Tuesday’s game against former league team Halifax Town.

Orient suffered a reality check as the train came off the tracks in their push for automatic promotion back to the league as Boreham Wood’s patient fluid style allowed them to over run the O’s in the middle of the park.

The home side climbed up to eighth but the scoreline should have seen Boreham Wood finish the game with more goals as Bruno Andrade missed a golden opportunity to snatch a third late in the match. The Wood as they are affectionately known to the Meadow Park faithful certainly had the O’s barking up the wrong tree and realistically could have wrapped up the game by half time if they had taken their chances. Instead Orient can count themselves lucky to be down by only a single goal at the break.

The O’s went into the match with three wins and one draw from their previous four games, 10 points from a possible 12 but were hardly invincible in the rain as Steve Davis men were cut down to size.

Orient were unchanged from the 4-1 win over Guiseley last Saturday as Davis stayed with Henry Ochieng in the middle and David Mooney up front.

Boreham Wood included ex-Orient winger Blair Turgott (his name always sounded like a brand of washing up liquid) in their starting formation after he joined on loan from Stevenage as late as Friday.

In the first ten minutes Orient started well with efforts from Ochieng and Clay that were high and wide but it turned out to be their best patch of the game as Boreham Wood came out of the forest to dominate in large chunks.

Bruno Andrade had an effort curl away from the Orient goal as The Wood really took the game to the O’s and sustained a significant period of pressure and eventually the Leyton Orient defence caved in.

Kieran Murtagh fired past O’s keeper Grainger but Elokobi got back to clear off the line. His clearance only went as far as Danny Woodards and the left-back drilled home from 12 yards with 35 minutes played. Orient almost nicked an undeserved equaliser just before half time as David Mooney played a brilliant through ball straight through the Boreham Wood defence. Bonne the O’s striker latched on to it but snatched at the chance and fired over and the ball actually went out of the ground with Alan, the Boreham Wood cocker spaniel mascot looking on in relief.

In the second half it wasn’t long before Orient were right under the cosh and they were two down by the 50th minute. Elokobi played a ball your Grandmother would have been disappointed with as he passed without looking and Bruno Andrade picked up the loose pass before cutting back for Murtagh to slot past Grainger.

Andrade almost notched just before the hour but shot just wide and Shaun Jeffers was set up perfectly but the home forward also tapped wide.

There was no urgency in the O’s which was frustrating even with Davis making all three changes. When Elokobi limped off with with 7 minutes remaining the game was already up and the visitors had to finish the game with 10 men.

Orient did create a decent opportunity in additional time when Bonne found Koroma and he screamed past the defender, but could only shoot wide of goal.

Tuesday’s home game against Halifax will be a good barometer of where Leyton Orient really are  after 10 matches of the season as Halifax are up to sixth place following their 3-2 win against Maidenhead on Saturday.